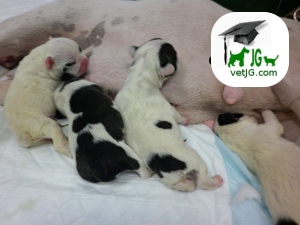 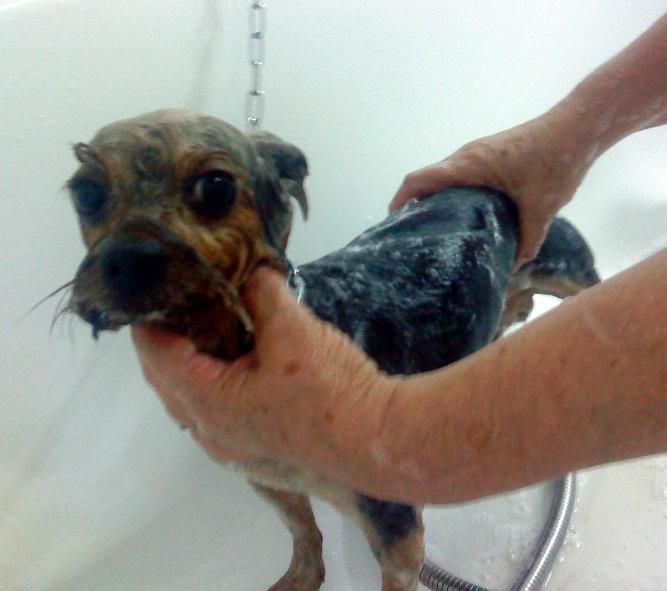 Dogs were domesticated from the gray wolf about 15,000 years ago

Dogs were domesticated from the gray wolf about 15,000 years ago. They perform many roles for people such as hunting, herding, protection, assisting police, companionship, and, more recently to assist handicapped people.

In 2001 there were an  estimated 400 million dogs in the world. Over the 15,000 years the dog has been domesticated, the dog has developed into hundreds of different types through selective breeding by humans and shows more behavioural and morphological variation than any other land mammal.

Dog is the commonly used term that refers to members of the Canis lupus, or «true dogs», including the wolf, coyote (canis latrans) and the jackal (canis aureus) whose main representative is the Golden Jackal, the dingo (canis dingo) and the domestic dog (canis familiaris). Wolves in North America or Eurasia appeared when the two continents were  connected by the Bering Strait and from there spread to the American continents, Europe and Asia eventually reaching the south of India, Arabia and northern Mexico. There is  evidence that the jackals originated in North Africa and from there spread to the south  and west, reaching the Malaysian peninsula as well as India and Arabia, where they  coexist with wolves. The coyote is isolated geographically from the jackals, but not the  wolves and only inhabit the Americas. Consisting of a single species that originated  recently (about 500,000 years ago) and was formed from a few packs of wolves that  were left behind after the last Ice Age. The dingo is the Australian representative of the  genus Canis, although there is evidence that in fact it was a feral dog, which reached the Australian continent from Asia, alongside the first natives. This genre would originate   from a subspecies of the wolf called Canis lupus pallipes. There are several theories about  the origin of the domestic dog the most accepted being that they are the direct descendants of the wolf. However the influence of other species in the evolution of the  domestic dog may be considered more than a suspicion, at least in some breeds. You can  see in the enormous genetic variability present in today’s domestic dog, for example the  differences between the Chihuahua and the St. Bernard, that there can only have been a multifaceted origin or it was at least heavily influenced by other species.

Wolves and their dog descendants would have received significant benefits from living in human camps…more safety, more reliable food, lesser caloric needs, and more chance to breed. Humans would also have benefited enormously from the dogs associated with their camps. For instance, dogs would have improved sanitation by cleaning up food scraps.  They would have alerted the camp to the presence of predators or strangers, using their  acute hearing to provide an early warning. Anthropologists believe the most significant benefit would have been the use of dogs’ sensitive sense of smell to assist with the hunt. The relationship between the presence of a dog and success in the hunt is often  mentioned as a primary reason for the domestication of the wolf. The dog was our first  pet, as manifested by the numerous rock paintings found in various latitudes showing  hunting scenes. The first two contributions to man’s way of life were: the aforementioned  cooperation in hunting and the protection of the camps. At this point arose the need for  two types of dogs.

One light, brave, with good sense of smell, obedient and with the aptitude to race… the Canis familiaris leinieri, ancestor of the hound. Another, heavier, stronger, good hearing,  which would correspond with the modern guard dogs whose ancestry is Canis familiaris inostranzewi. This was soon followed by the domestication of sheep, which required a   Shepherd type dog. The shepherd dog needed to be lightweight, extremely intelligent,  and above all to have lost the instinct of aggressiveness towards cattle and sheep… their ancestor was the Canis familiaris metris-optimae.

Independently, in the northernmost regions the Canis familiaris palustris formed which  evolved into the modern sled dogs. In modern times the most widespread form of  interspecies bonding occurs between humans and dogs and the keeping of dogs as companions. In the 1950s and 1960s, dogs were kept outside more often than they tend  to be today being primarily used as a guard, children’s playmate, or walking companion.

Since then there have been huge changes in the role of the pet dog, such as the increased role of dogs in the emotional support of their owners. People and dogs have become more  and more integrated in each other’s lives, to the point where pet dogs actively shape the way a family and home are experienced.

This article was published in Costa Blanca News.